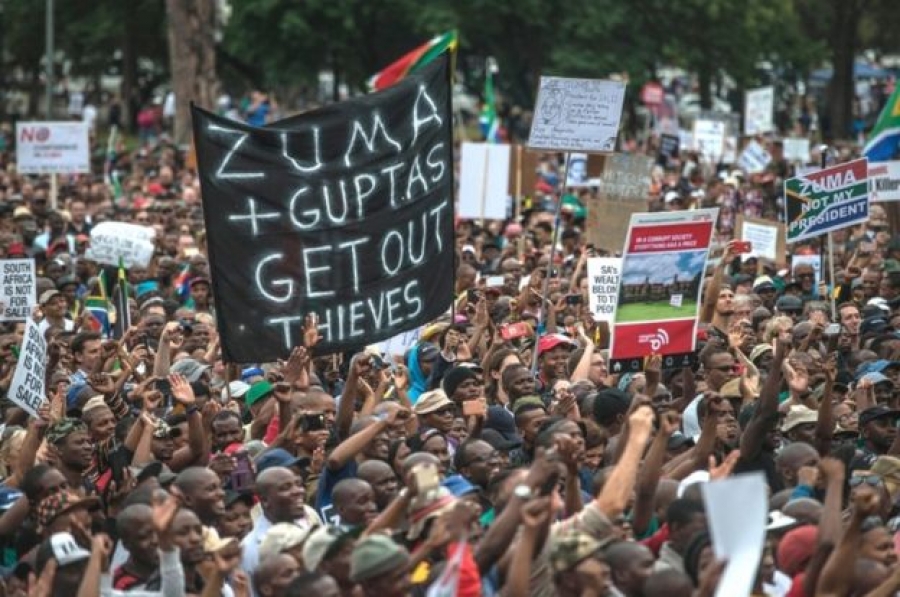 Zuma no confidence vote: Will 'the Zuptas' fall in South Africa? Featured

South Africa is up in arms. Marches are being organised in support of President Jacob Zuma, as deafening protests call on him to step down.

The president has survived several votes of no confidence in the past. He faces another on 8 August - but this time it's not just the opposition who are trying to unseat him.

Within the governing ANC, some are disgusted at the scandal surrounding their leader and have said they are facing a campaign of intimidation aimed at propping him up. It may not be enough.

A public outcry erupted after a series of leaked emails appeared to show the extent to which President Zuma's billionaire friends, the Gupta family, exerted influence. Although the emails have not been independently verified, the alleged corruption they point to has coined a new name, "state capture".

The family also stand accused of hiring a British PR firm to distract attention from the allegations by blaming the country's problems on white-owned businesses, or "white monopoly capital".

Both the Guptas and President Zuma deny wrongdoing. But as it has raised the toxic subject of race once again, the scandal has brought South Africa to the brink.

And it's not "Zuma must go" that the crowds are chanting - it's "the Zuptas must go".

"The Guptas are the most hated family in South Africa" says journalist Micah Reddy. He writes for the online news site AmaBhungane, which has played a crucial role in unveiling the murky interactions between the family and the Zumas by publishing "the Gupta leaks".

These are more than 100,000 leaked emails between the family and their associates, which it is claimed suggest a complex web of government contracts, as well as alleged kickbacks and money laundering.

So, who are the Guptas?

The three Gupta brothers moved to South Africa from India in 1993. Since then, the family has become very close to President Zuma. They have also become billionaires - and for many people in South Africa, it's hard not to connect the two.

The Guptas started with a relatively small computer business, but in the space of two decades they have come to own coal and uranium mines, technology businesses, arms and manufacturing interests as well as a TV station and a national newspaper.

The Guptas' influence on Jacob Zuma was cemented in 2007, when he Zuma became the leader of the ANC. New laws in South Africa at the time made it essential for big companies to have black directors, particularly if they wanted to win government contracts.

In a masterstroke, the Guptas appointed a very young and relatively inexperienced Duduzane Zuma, the son of the future president, to the boards of a number of their companies.

Since then, they have also employed President Zuma's wife and daughter, and are alleged to have paid for a lavish wedding for Duduzane, as well as a number of extravagant perks, including a palatial flat in Dubai.

The Guptas' interests are now seen as being so intertwined with the Zumas that they are known in South Africa as "the Zuptas".

The Guptas also deny wrongdoing, and say they are victims of racism and xenophobia.

The family are seen to have a grip on the levers of power in South Africa, including influencing the hiring and firing of ministers.

Julius Malema has led the opposition Economic Freedom Fighters since he was thrown out of the ANC in 2013. He says he has seen the Gupta family's influence on President Zuma since 2011, when he was still an ANC insider.

He recounts an instance when the Guptas announced who the next sports minister would be long before the cabinet had been told.

This chimes with the very public allegation from former Deputy Finance Minister Mcebisi Jonas, that he was offered 600m Rand (£34m; $45m) by the Gupta family to be the next finance minister - as long as he did their bidding.

The Gupta family have denied this account, and within a month, the deputy finance minister had been sacked.

A damning report from the public protector, the government ombudsman in South Africa, also accused the Guptas and President Zuma of colluding to win government contracts at inflated prices, to exert influence on ministers to help Gupta-owned businesses, and to earn kickbacks from international companies by promising them access to South African markets.

The report also indicates that the alleged influence is not only exerted at the ministerial level. Whole boards of state-owned companies are said to have been sacked and replaced with "Gupta-friendly" candidates.

This is perhaps the most dangerous aspect of "state capture". It's not only the alleged misuse of billions of rands of public money; the most devastating effect may yet prove to be the erosion of trust in public institutions.

Atul Gupta, who runs the family's media empire, is adamant that the long list of allegations is just "perception mongering" on behalf of "white monopoly capital".

This term for the white businesses who benefited from the head start they got under apartheid, and are still the biggest players in the South African economy, used to be an academic label confined to textbooks, but over the last year, it's become a furious buzzword all over social media.

Could this be the work of the British PR firm, Bell Pottinger? Hired by the Gupta family to raise awareness of "economic apartheid" in South Africa, they set up a social media campaign and advised on political messaging and speeches that blamed unemployment and inequality in South Africa on white-owned businesses.

Bell Pottinger deny responsibility for the racial tensions that have followed, although they have sacked the member of staff in charge of the account and launched an internal investigation.

The company says it considers the social media campaign to have been "inappropriate and offensive" and that "senior management have been misled about what has been done."

After the revelations in the Gupta leaks and the critical report by the public protector's office, a political backlash has begun.

Politicians from all parties, including Deputy President Cyril Ramaphosa, have called for corruption money to be returned to the people of South Africa. Civil Society groups are organising conferences and marches to fight "state capture", and President Zuma faces a vote of no confidence.

For the Guptas, this could be a moment of reckoning. The opposition parties have accused them of "treason". If President Zuma loses, Atul Gupta confesses that they might sell up their business interests.

"I decided a year ago that we might like to sell this company's shares because of so much restriction financially on our family, but I would like to stay in South Africa forever," he told the BBC.

In the meantime, the chants of "the Zuptas must go" grow louder.