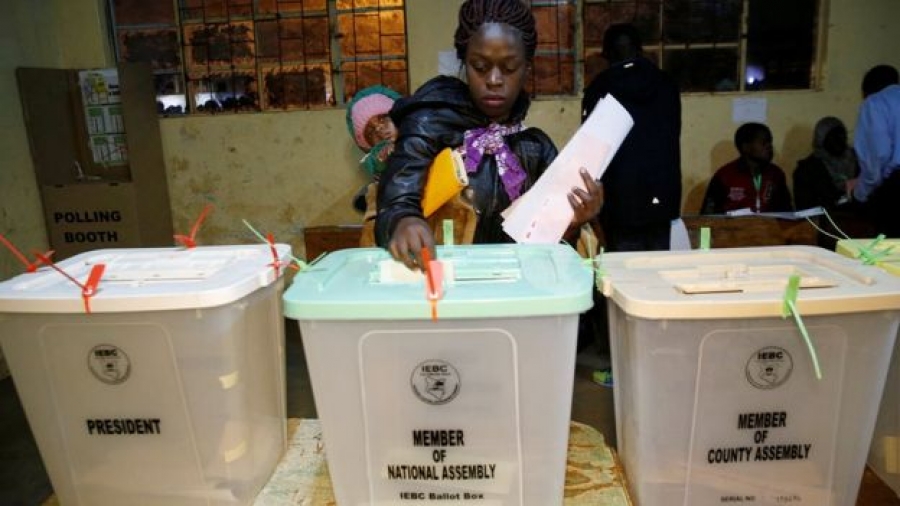 People are voting in Kenya's general election amid fears that the result could trigger communal violence.

On the eve of the vote, President Uhuru Kenyatta appealed for calm in a televised speech.

He urged the 19 million registered voters to turn out in great numbers, but to "do so in peace". Queues formed early outside many polling stations.

The contest pits Mr Kenyatta against his long-time rival, Raila Odinga, and is seen as too close to call.

Mr Kenyatta, the 55-year-old son of Kenya's founding president, is seeking a second and final term in office.

The final week of campaigning has been marred by the murder of a top election official and claims of vote-rigging.

Observers say the leading candidates both avoided inflammatory speeches as polling day drew closer. In 2007 more than 1,100 Kenyans died and 600,000 were displaced after a disputed election - an outcome neither side wants to see repeated.

"After you cast your ballot, please go home," Mr Kenyatta said on Monday.

"Go back to your neighbour. Regardless of where he or she comes from, their tribe, their colour or their religion. Shake their hand, share a meal and tell them 'let us wait for the results,' for Kenya will be here long after this general election."

Opposition leader Mr Odinga, of the National Super Alliance, also addressed the public on Monday. He raised fears about vote-rigging and claimed the deployment of at least 150,000 members of the security forces was a ploy to intimidate voters.

However, he congratulated Mr Kenyatta on his campaign, describing him as a "worthy opponent".

"May the stronger candidate win tomorrow," he said.

Eight presidential candidates are on the ballot on Tuesday, with polls open until 17:00 local time (14:00 GMT).

A candidate needs 50% plus one vote for first-round victory

More than 14,000 candidates running across the six elections

More than 45% of registered voters under 35

Some 180,000 security officers on duty nationwide in case of trouble

If that threshold is not met it will trigger a run-off vote between the top two candidates, with the winner requiring a simple majority.

First results are not expected before Wednesday, but if the race is close it could take three days for a winner to emerge.

Voters are also choosing lawmakers, senators, governors, county officials and women's representatives. More than 14,000 candidates are standing in those elections.

Mr Odinga, 72, has run for president three times and lost each time. President Kenyatta beat him in the last election in 2013, but their rivalry is generations old - their fathers were political opponents in the 1960s.

Mr Kenyatta and his running-mate William Ruto were indicted by the International Criminal Court for their alleged roles in the bloodshed a decade ago. The case ultimately collapsed due to lack of evidence, and after key witnesses died or disappeared.

Some families have travelled from the capital, Nairobi, to their ethnic heartlands over fears of violence.

Writing from Nairobi, the BBC's Alastair Leithead says what happens after the election is less about who wins and more about how those who lose take their defeat.

The success of the country's computerised voting system is key to the process being considered free and fair.

If it fails - as it did in 2013 - the votes will be counted manually and the loser will no doubt challenge the result.