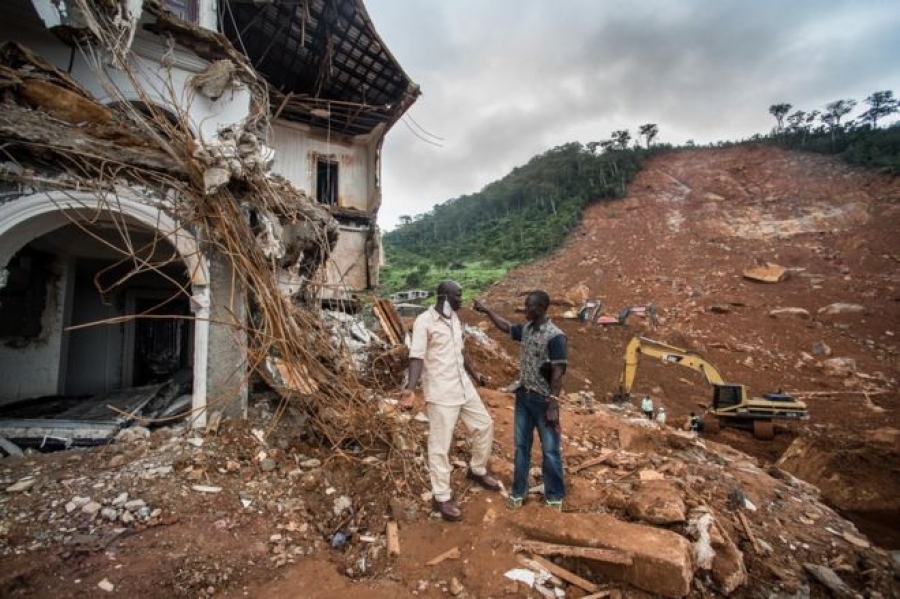 More than 3,000 people lost their homes in last week's mudslide in Sierra Leone, which killed at least 499 people, with more than 600 still missing.

"It is difficult to know the precise number of victims," says volunteer body collector Fessellie Marah, "because so many bodies were broken apart. We are still finding body parts in the rubble".

The side of Sugar Loaf mountain collapsed onto a community called Regent at around 05:45 on Monday morning. It sent a torrent of water, mud and rocks hurtling down the valley, also crushing houses in two other areas: Kamayama and Kaningo.

Journalist Olivia Acland has spoken to some of the survivors.

'I froze and watched as the whole hill came down'

At the bottom of the hill in Regent, a half-broken house hangs over the churned-up earth.

Alfred Johnny, the caretaker, moves aimlessly around the rubble smoking cigarettes and taking phone calls. He lost three friends, all of whom were trapped inside the house when the hillside collapsed.

"I am living in the little house at the back," he says, pointing to a small bungalow which is damaged, but still standing.

"The big house belongs to my brother. He lives in Australia. It was my job to look after the place. Two workers and an engineer were staying there, fixing the drive that leads to the house.

"I was standing on the veranda when the mudslide happened. I heard a cracking noise. It was so loud, it sounded like dynamite. Then rocks started coming down. One landed close to me and I fell down. My body was shaking uncontrollably.

"I tried to run and open the front door of the house and get the others out but more rocks kept coming. It was impossible to move anywhere.

"I froze and watched as the whole hill came down. Heavy stones were slapping the sides of the houses and they were falling. Everywhere people were screaming. I watched until every last house had collapsed," Mr Johnny says.

He goes to show me the place where he had stood watching when his radio, one of the few items he was able to salvage from his flooded house, starts playing a song. "Oh God help Salone [Sierra Leone], oh father help Salone, save this land we love," it sings.

Mr Johnny has managed to clean mud and water out of one room in his house and is still staying there. His mattress was ruined so he has flattened cardboard boxes onto his bed. His muddy possessions are piled up in the other room, where there is still a thick layer of slippery mud covering the floor.

'I saw the damage, I knew that my family was gone'

A little way up the hill a middle-aged man and woman are sitting on a pile of gravel. They are both silent, looking away into the distance.

The woman, Yatta Kamara, says: "I lost 14 members of my family. I had left the house that evening to go and collect rice from my aunt's place because we didn't have anything to eat and I needed to feed the children.

"When I arrived at my aunt's house, the rain was heavy so she told to stay the night and return in the morning.

"The next morning at 06:30 I was washing, preparing to go home. A neighbour came running to me saying: 'The mountain has collapsed, your house and your family have been buried'.

"I ran home as fast as I could and saw big crowds of people and the whole area turned to mud. As soon as I saw the damage I knew that my family was gone," Ms Kamara says.

She asks me to wait a minute and runs off to get photos of those she has lost, including her four children and baby grandson.

"That's my youngest daughter, Jeneba," she says pointing at a six-year-old girl striking a pose while cradling her grandson.

Ms Kamara is now staying with her brother Mohammed, who lives in the east of Freetown. She has returned to Regent to receive emergency food supplies from Street Child, a non-governmental organisation.

She looks bleakly into the distance and says for the second time: "I lost everything."

'I escaped through a hole in the roof'

In Kaningo community, down by the river, Abdul Mansaray is trying to clean the mud out of his house.

Along with his brother and two friends, he is shovelling mud into a pile and carrying it outside on a flattened canvas bag. There is a brown watermark just below the roof of his bungalow, showing how high the water came up. He is standing in a front room where there is a large hole in the ceiling.

He says: That's the hole we used to escape. There was water in my room when I woke up so I went to wake my wife, children and brother.

"We tried to leave the house through the main door. By that time the water was getting higher, almost reaching my knee. We couldn't open the front door because there was water on both sides.

"We went to the back door and couldn't open it either. I looked around and saw a stick - the one we use for pounding spices.

"I broke the ceiling with that stick and with the help of my brother, pulled myself up onto the roof. Up on the roof I could see people's properties floating past.

"There was a ladder floating, so I got down and reached it. I passed it through the hole in the roof so my wife, children, and brother could climb out.

"We stayed on my neighbour's balcony watching the water get higher and higher. Thank God we all survived, though I lost my money and every possession".

Mr Mansaray is one of thousands to lose his life's savings along with his house.

As his neighbour, Said, says: "Very few Sierra Leoneans have bank accounts, usually just office workers. Everyone else keeps their money at home."

His wife and one of his sons have returned to their village in the north, but Mr Mansaray and his brother are staying with a neighbour who lives higher up the hill in the same community.

"We are trying to clean out the house so my family can return," Mr Mansaray says.

I ask him about the risks of staying there, and the possibility of another mudslide or flood. He replies: "Where else can I go?"

'How will my parents pay my school fees?'

Mbalu Bangura lives in the same community. She is 15 years old and is worried she will not be able to go to school again.

"How will my parents manage to pay my fees?" she says. "We lost everything in that house; my books, my uniform, and all my family's money."

She is limping badly and has a thin bandage tied above her ankle. She says that a glass bottle shattered on her leg as she was running to safety.

"We were escaping out of a smashed window because the doors of the house wouldn't open," she says.

"I have four small siblings and I passed them each through the window to my parents. The water was rushing fast and it was almost up to my chest.

"We climbed through the water carrying the small children. Everyone survived. A bottle hit my leg as I was getting onto the bank and some glass got stuck under the skin. An emergency volunteer took me to hospital," Ms Bangura says.

'A huge rock crushed them both'

Kadiatu Bendu lives in Kamayama Pentagon, a settlement roughly two miles downstream from the mudslide site. She is waiting for supplies at another emergency response centre based out of a school.

She is now staying nearby with a male cousin, who has a small house with three rooms. He has taken in eight others as well as Kadiatu and her daughter, meaning that 17 people are occupying his small house.

"It's not easy at all - we are so many in that place," Mrs Bendu says.

Though she was able to save Edna, the four-month-old baby she cradles in her arms, she lost her husband and 16-year-old daughter.

"My husband woke me up as the water was filling the house. The roof was already broken from the heavy downpour. He helped me to climb out through the roof with Edna strapped to my back, and went back to wake up our other daughter.

"He was trying to help her climb up when a huge rock came through the side of the house and crushed them both. I saw it happen. The roof stayed on because our house is made from tin with a wooden frame," Mrs Bendu says.