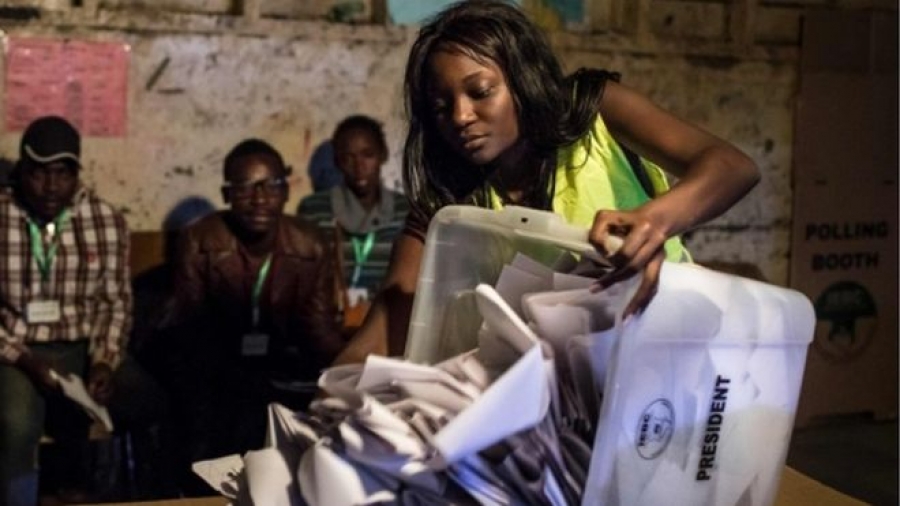 The European Union said that candidates should accept that losing was "natural" in a democratic contest.

Opposition presidential candidate Raila Odinga has alleged that counting has been manipulated to give incumbent Uhuru Kenyatta victory.

On Wednesday, he said that the IT system of the Independent Electoral and Boundaries Commission (IEBC) had been hacked, and Kenya was witnessing the worst "voter theft" in its history.

The IEBC said there had been an attempt to hack its system, but it failed.

Commonwealth observer mission head and Ghana's ex-President John Mahama said there was no reason to doubt the commission's ability to deliver a "credible election".

"We believe that the election has been conducted in a transparent and credible manner and that Kenyans must be commended for that election," he added at a press conference in Kenya's capital, Nairobi.

Expressing a similar view, African Union observer mission head and South Africa's ex-President Thabo Mbeki said he was satisfied with the way the electoral commission had conducted itself.

The opposition's hacking allegations should be looked into by the IEBC, he added.

Heading the Carter Center's observer team, former US Secretary of State John Kerry said the integrity of the process is still intact.

He urged all sides to wait for the final results, and for the loser to accept defeat.

In a statement, the European Union observer mission said the opposition had made "serious allegations" and it was up to the IECB to complete the "remaining steps with maximum transparency and adherence to the law".

"Candidates and their supporters must accept that not winning is a natural part of a democratic competition," EU observer mission head Marietje Schaake said.

"Any irregularities or challenges to the process and outcomes should be addressed through petitions and the courts," she added.

The IECB said it hoped to release final results from the presidential poll on Friday.

Raw polling data published on its website says that with almost all of results in, Mr Kenyatta - who is seeking a second term - is leading with about 54.3%, to Mr Odinga's 44.8% share of the vote.

These suggest Mr Kenyatta is heading for a first-round victory.

Mr Odinga's claim of rigging led to sporadic outbreaks of violence on Wednesday, but police denied reports that two people had been killed in election-related unrest.