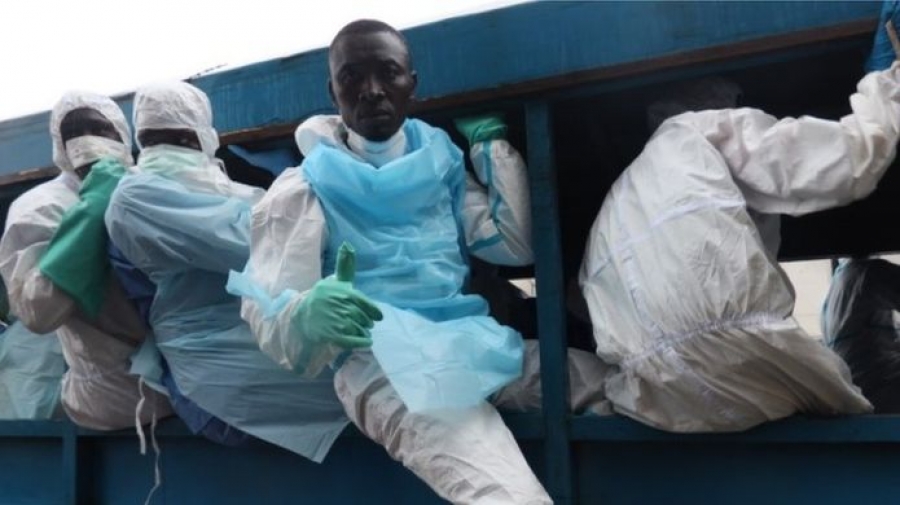 At least 600 people are still missing following a mudslide and flooding that devastated parts of Sierra Leone's capital, Freetown.

Dozens of volunteers like Jibrila Sesay are playing a central role in the gruesome clear-up operation after Monday morning's disaster.

"We have been collecting corpses and pieces of corpses and bringing them to the mortuary. It does not stop," says Mr Sesay in a break outside the Connaught Hospital mortuary.

The volunteers are shuttled at high speed in police trucks and Red Cross vehicles to and from the devastated Regent area. The operation aims to prevent a health emergency - caused by rotting human remains on the hillside - from compounding the impact of the deadly landslide and floods.

"There will be more bodies, in smaller numbers in the coming weeks. That's how it is with disasters in Sierra Leone. But we cope. We are lucky because we are prepared," he says, paying tribute to the volunteers like Mr Sesay who were trained in safe burials during the 2014 Ebola epidemic.

Death certificates are completed once a body has been identified. At that point family members can choose to remove the body for a private funeral or, in most cases, given that survivors have lost everything, leave the burial to the government.

Across the road from the mortuary, bereaved relatives stand lined up along the pavement under umbrellas. Many clutch photographs of loved-ones - curled or faded but priceless now.

Sorrie Koroma's daughter was 12. She remains on his phone screen. "I need to see my daughter's body just so my life can continue," he says. He believes his sister died along with her five children and his daughter, who was staying with them for the school holidays.

Everyone here has lost several family members. They were asleep in their beds when the watery mud coursing down Sugar Loaf Mountain dislodged giant rocks. These in turn seem to have gathered incredible velocity and crashed through people's homes. Shacks were flattened, concrete houses suffered the same fate.

During Wednesday, thanks to the tireless efforts of volunteers such as Mr Sesay, the mortuary became overfull. The stench of decomposing bodies pervaded Lightfoot Boston Street.

A decision was taken to bag up body parts and all corpses damaged beyond possible identification. In a new volley of ambulance runs, Mr Sesay and his colleagues began transporting decomposing human remains to a mass grave designated for them at the Ebola cemetery at Waterloo.

By now Mr Sesay seemed inured to his gruesome calling. He was just hungry.

"We have not been given a meal or a drink or even money for transport. At least during Ebola, international organisations took care of the volunteers," he says.