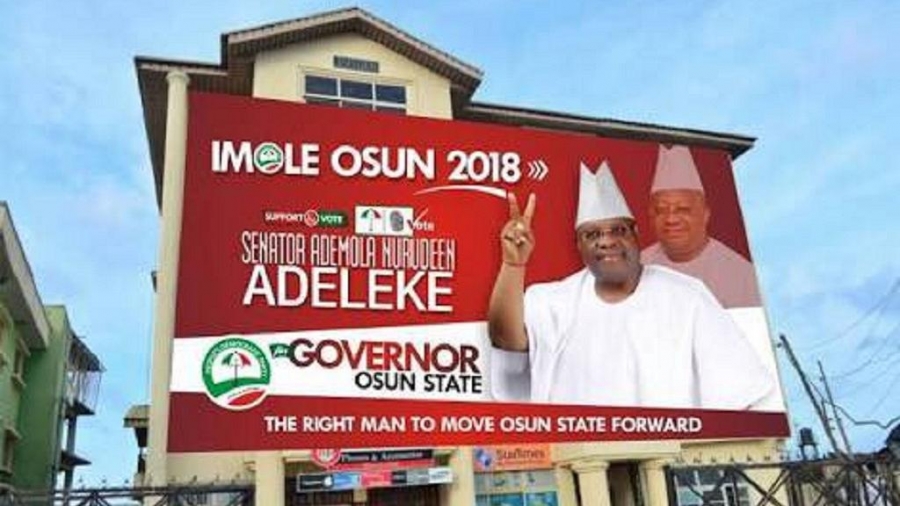 The southwestern Osun State gubernatorial poll was declared inconclusive by the Independent Electoral Commission, INEC, over process violations that led to cancellation of votes in some areas.

According to an INEC statement of September 23, the cancellation was in areas where there was no voting of where there were disruptions.

“Based on the results collated by the Returning Officer, the margin between the two leading candidates is 353 which is lower that the number of registered voters in the affected areas,” the statement read.

The PDP candidate would have won hands down but for the breaking away of a former aspirant who run on a different ticket. Iyiola Omisore’s SDF reportedly took a chunk of PDP votes in the elections.

Omisore has since declared his support for the PDP candidate after meeting with recently defected Senate president Bukola Saraki who is also actively campaigning to become presidential flag bearer for the PDP in February 2019 polls.

Thursday’s rerun is thus seen as a done deal as the ruling All Progressives Congress (APC) Gboyega Oyetola was trailing Adeleke when the results were declared inconclusive.

The 58-year-old Adeleke, dubbed “the dancing senator” because of his public dance moves had the support of Davido who held a series of shows in the state in the run up to the September 22 vote.

The incumbent APC Governor Rauf Aregbesola is stepping down after a maximum of two four-year terms. Saturday’s poll is the final major electoral test before Nigerians vote for a new president, parliament, governors and state legislatures in February and March next year.