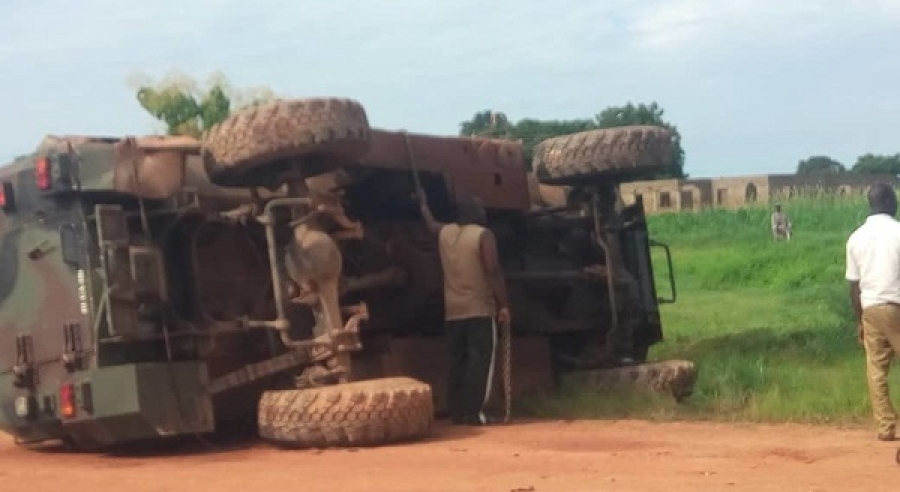 A personnel of the Ghana Armed Forces has perished as a military armoured car was involved in an accident at Zebilla in the Upper East Region.

The vehicle with registration number 19 GA 08, had two other soldiers in who were rushed to the Zebilla District Hospital where they were treated and discharged.

Eyewitnesses told our correspondent, Simon Atubugre that the armoured vehicle, which was speeding, hit a pothole and somersaulted three times amidst firing of gunshots before it landed on its side behind the Zebilla Senior High Technical School.

Thick clouds of dust filled the air momentarily as the vehicle crashed on the feeder road Saturday evening at about 5:00 pm.

A source within the Police in the area confirmed accident but did not give details.

The officers are said to be among other military personnel stationed at Zebilla to protect the country in the area where some Burkinabe’s displaced by chieftaincy dispute in Zoaga, are currently seeking refuge.

A total of 283 Burkinabe’s, including one of the feuding chiefs, are seeking asylum at Widnaba and Tilli in the Bawku West District of Ghana.

It is unclear whether the officers involved in the accident, who wore plain clothes, were on official duty.

Eyewitness who spoke to 3news.com on condition of anonymity said they were at a bar by the roadside at about 5:00pm Saturday when the armoured vehicle passed with top speed attracting some locals to wonder what was happening.

According to the eyewitnesses, just when they stepped out to see what was happening, they head a boom sound amidst gunshots and only to find the vehicle had crashed into a pothole just about 200 metres away.

They immediately rushed to the scene only to find the soldier who was on top of the vehicle manning the riffle lying dead in a pool of blood. The two other soldiers who were inside the vehicle were said to have come out themselves.

The two, according to the eyewitnesses, were put on a motorbike to their base at the District Assembly guest house to report the incident.

A team from the base, together with the two officers involved in the accident, was dispatched to the scene to pick the body of the deceased to the Zebilla District Hospital.

The vehicle was left at the scene until Monday morning when a Ghana National Fire Service vehicle was brought in to tow it away.